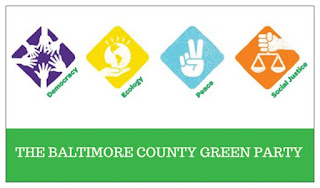 The Baltimore County Green Party, (BCoGP), met on Tuesday night, July 11th at Towson Library.  Our June general meeting had brought our biggest membership attendance to date, and a record number of dues-paying members.  The July meeting was a little smaller, with many members away on vacation, but we took action to consolidate that support and to expand our engagement as we move forward.

We began the meeting with a brief educational about the British Labour Party and the recent near-victory of Jeremy Corbyn, focusing on the lessons we can take away for the Green Party.  The Labor Party also began small and it took a quarter century to replace the Liberals as the #2 party in the UK, and nearly fifty before it won power in its own right, and enacted major social reforms in Britain, including a national health plan, old age pensions, etc.  During that time period, the Liberal Party consistently accused Labour of dividing the opposition to the Tories, and even of being financed by them, similar to the charges we must face today.  In the last twenty-five years, the party had drifted to the right. Jeremy Corbyn, by returning the party to its radical roots, and by engaging in an aggressive anti-austerity, social justice campaign, deprived the Tories of their majority and is currently poised to force another election and to take power.

Because of the growth of the local, and because Mark McColloch was elected as the Secretary of the Maryland Green Party, MGP, we are now entitled to two Delegates to that body.  Ryan Sullivan and Rachele Lawton were nominated for those positions and were elected by secret ballot.
After brief reports, we broke into three committees, met for 30 minutes and reported back.

Action/Issues Committee discussed a number of upcoming events and our participation in them:
1.       There will be a meeting in Baltimore on this Thursday evening, of the Baltimore Racial Justice Action (BRJA), to discuss the topic: Is Racial Justice Possible Within the Two-Party System.  A number of our members and City GP members will be attending.  The meeting will take place from 6:30-8:30 pm at the American Brewery Building.
2.       The Monday, July 24 march in Washington DC for Medicare for All.  Because all our members were either working that day or would be on vacation, it does not seem likely that we will attend, in force.  Another dimension of the protest, however, is for 28 people to stand on bridges over interstates, with signs that read MEDICARE FOR ALL.  We discussed the possibility that we could partner with other groups to do this for a few hours in the evening that day.  If some member wishes to take the lead in organizing this, please contact Mark McColloch at mmccolloch@ccbcmd.edu .
3.       We plan, over the next few months, to introduce a $15 an hour minimum wage bill before Baltimore County Council.  This will require some research and coalition building.  We spent some time debunking the recent fraudulent minimum wage position paper issued by conservative economists in Seattle.  That will need to be answered.  Volunteers are needed for this project.
4.       We discussed the need to initiate peace actions, in coalition with other anti-war forces in the County and perhaps in the City, in light of the bi-partisan pro-war policies of the Democrats and Republicans, in re the Middle East, Venezuela and Korea.  Again, volunteers are needed for this work.
5.       We discussed local issues, such as the need to rebuild Towson and Delaney High Schools, the County Charter revisions, and solar power.  Paul is monitoring the actions of County Council.

The Outreach Committee is working on several upcoming events:
1.      The most immediate is our Maryland Green Party picnic at Baltimore County’s Double Rock Park, this Sunday, July 16th at the Rich Pavilion.  All Greens in the state, plus Green-leaning or Green-interested persons, are invited to attend.  It’s a Bring Your Own Drinks event, but also setup as a potluck for other items.  See the sign-up sheet to indicate what you might bring.  Lots of fun for all and family-friendly.  Dogs are welcome, too, but must be leashed.
2.      On Tuesday, July 18th, at the Reisterstown Branch of the Baltimore County Public Library, from 6:30-8:30pm, we will hold an outreach and educational meeting.  It is aimed at residents and Green Party registrants in that area of the County.
3.     On August 21st, at the Abington Branch of the Harford County Public Library we will hold a meeting to launch a Maryland Green Party Chapter in Harford County.  We are building this event, and will staff it, but funding support has come from the MGP, in an effort to build several new County locals across Maryland, before the end of the year.
4.     We want to reach out to the several dozen people who have attended BCoGP meetings in the past, but have not been active in the last few months.  We want all of those people to feel that they are welcome to return to the local, at any time.  We have grown, and are currently at our greatest size to date.  We set a goal to reach out to previous attendees to expand further.  Oneda has volunteered to take the lead on friendly reconnections with these valuable members and contacts.
5.      We agreed that we would explore some mechanism for allowing for voting on selected items, via a web tool such as Loomio.  As the membership has grown, making all the decisions at the membership meeting does exclude those absent that month, from the decisions.  This will need to be done selectively, so that the value of attendance and hearing discussion is not lost.

The Electoral Committee also reported on its recent work and on upcoming events.  The Committee has developed a document that highlights the types of candidates that we want to support.  It was agreed that we wanted articulate candidates, who support the main tenets of the Green Party, and who can effectively voice them.  We also want candidates who will be willing to put themselves forward as the candidate of the Green Party, not Joe or Sally Smith, who just happens to also be running as a Green.  We want party affiliation and party building to be a major element, along with raising critical issues and speaking for the 99.9%.  The Committee will meet again at 7pm on August 7th at Panera Bread in Towson.

We agreed that our August meeting will primarily be a candidate’s night.  Green Party candidates who have decided to run for offices that embrace Baltimore County will be invited to give presentations, followed by a Q and A period.  Kevin Zeese, candidate for the Maryland Green Party nomination for Governor, will attend and speak, as will Ryan Sullivan, our own local member and probable candidate for Maryland Legislative District 7.  Other members are seriously considering candidacies, and will speak if they reach a decision.
Our next meeting is on a Thursday evening, August 17th at the Towson Branch of the Baltimore County Public Library, in the Wilson Room.

We appreciate the dedication, commitment and support that all bring to our Baltimore County Green Party local.  If you need to catch up with your dues or are interested in becoming a dues paying member, please visit our online dues paying mechanism.
Yours in solidarity-
Kate Holmes
Mark McColloch
Co-Chairs